As a child I used to think that summer was so long, as well as the school year.  It seemed overwhelming to think of anything a year away.

Now at my advanced age of 55, lol, I cannot seem to catch up to what day it is since the days and months and years seem to fly by.

But in contrast, it seems as if it should be later in the week than it is.  Weird, I know.  Maybe it's because I have so many things going at once and can't focus on one thing?

The last few days I've been tying fringe on a small group of tablerunners that I took off the Fairloom. 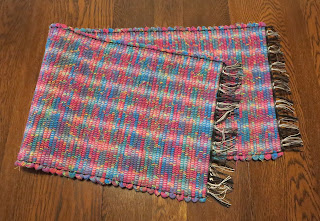 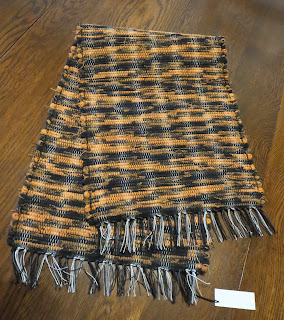 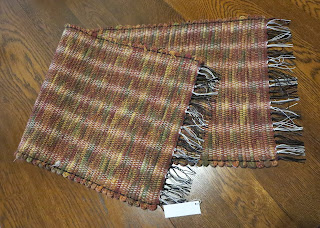 I'm showing you just a few that finished.  The black and white warp lets me weave with some random colors that would be challenging to use on other colors of warp.  I will be doing some black / gray tones too, but these just wanted to get done right away :)

The weather turned into fall today.  Fifty MPH gusts, overcast, a little drizzly.  But the baby calves that are about a month old are loving it.  Tails up and running in circles around the mamas tonite.  Cute little buggers.

Yesterday was another reminder of time passing.  It was my old mare's last day.  It had been planned and I'm glad it was a nice sunny fall day for her last one.   She was 28 and I couldn't bear to have her go through another hard winter.  I watched this old girl be born - her mom was my 4-H mare, so I've known her forever.

It is a sad thing to lose an old friend, but I look to the future.  Her half sister Queenie is still with us, and I am hoping she will be having a baby next spring.  Also her two daughters, Buzz and Flutter, should be mamas themselves next spring.

The death of my animals is so hard on me, even if I know it is needed. You have a good attitude, and foals to look forward to.