Back again for a quick pic of another finish. 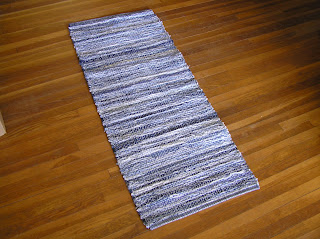 Denim mini with a hemmed edge here.
I just love these denim rugs!

I REALLY need to do get some of these made.  As of now, minis are are all I have on hand.

Good problem to have, but they take much prep work before I get to weave.  I've got oodles of strips ready to sew together, now just need to find the time to get to sewing and get the Union warped up for blues... again!

What's nice is that I now have that big Studio loom that I can have in a different colorway going at the same time.

Hint...   Might help to get that one threaded and sleyed!  HA 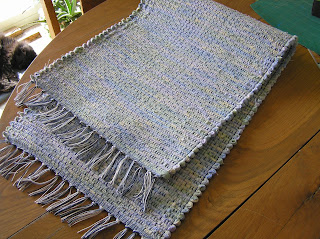 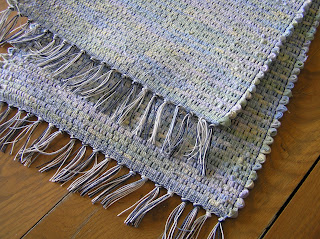 Here is the last of the table runners from this warp.

See Harry laying in the sun in the top pic?  :)

Busy day today, all for now! 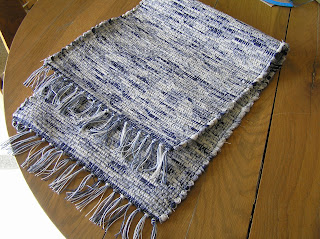 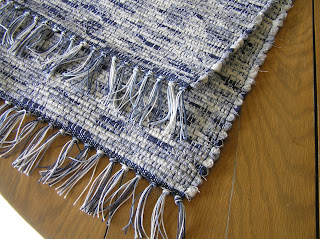 Close up ~  The rags for this runner came from a blue and offwhite checkerboard tablecloth.  I cut it in a spiral with my rag cutter.  I wasn't sure if that was possible, but I found out it is!

Even square and rectangle cloths I can manage it by taking some off of each corner.  Cutting it that way eliminates sewing strips together.  Plus it's faster cutting.  Never have to reposition cutting rulers and rotary cutters. Just crank away and feed in the material!

Had a fun time yesterday.  The team had a special ceremony before the show started for the seniors. The senior girls got flowers and their parents were introduced.  It was a beautiful weather day, not hot or cold.  Got to visit with another mother ~  We met the first day of Freshman orientation way back at the start.  When our daughters found out they were both twins, it must have given them an instant connection.  They've been great friends since then.  They call each other their SDSU twin :)   My daughter has been on the receiving end of having a stand in mom at shows and events when I couldn't be there.  She calls her Mama Joni!

Leah had a great horsemanship ride receiving a score of 69.5, and was chosen for the 'workhorse' award.  All the team members are required to sign up at the beginning of the year for duties involved with each home show.  Leah picked show management, and it was a good fit.  Many compliments on her management skills....Only thing marring her day was her sore throat.  The girl has either strep or mono... She said she doesn't feel bad overall, it's just her throat so I'm thinking strep.  I hope the girl was smart and stayed home from the annual St Patrick's pub crawl last night!

I'm finally up this morning - I had trouble driving home last night.  I was so sleepy I was scaring myself. I finally pulled over at a truck stop, hit the restroom, bought a Dt Mt Dew and some sugar laden candy.  Got back in my truck, guzzled the soda and slammed some Skittles - lay back and wham, I was asleep.  Woke up about a 1/2 hour later.  Felt much better after the powernap, caffeine and sugar blast :)  No problems the rest of the drive, and no problems going right to bed and slept well.  It's a bi**h to do things during the day, when you are used to the other side of the coin...

All for now, my weekly catch up with my life day is calling. 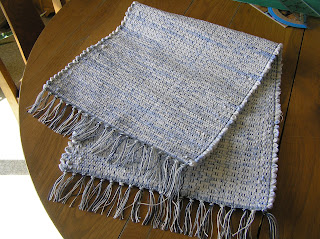 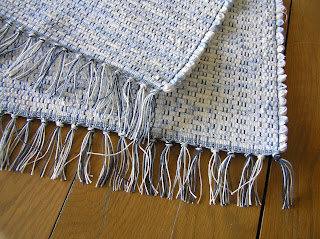 So I finally wove off the blue narrow warp from the Union.

I've got the runners and rugs all edge finished - hems and fringes.

Now to design some bags!

My plan is to show you pics of the newest projects one at a time, so I don't overload you.

Or, to be truthful, to make it look like I'm actually more productive than I actually am!  LOL

Little challenging to remember to take pics in the daylight before I go off to work.  I have a few pics that need to be retaken - too blurry :(  Maybe Sunday I'll get around to that!

Tomorrow off to SDSU to watch my girl ride in the equestrian competition.
Good Luck, Leah!

It's been an incredibly warm, for South Dakota, last week or two.
I believe the thermometer was over 80 degrees today.

Quite a difference from last March 11 --- 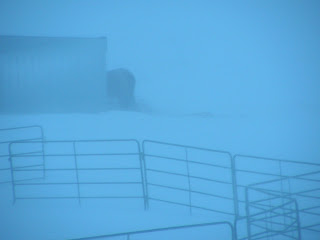 I've finally woven off the last of the warp on my Union.
The old girl hasn't been naked in about a year... 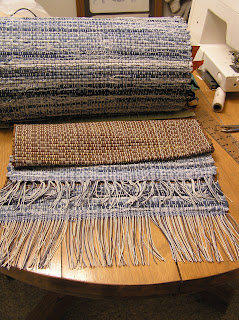 I've got a roll of mini denim rugs and purse bodies that need finishing!

The bags are a little exciting to get to, the denim is a little less so exciting, but much needed.

Now I need to get the Studio Loom threaded so I can weave rugs on that, and a narrow table runner warp onto the Union to weave up some of the many rejected tableclothes I've been collecting.

Worked a bit on the organizing in the basement.  Got some done, but not enough.  Sigh.

We finally have winter here.  Got a good old blizzard last Wednesday with almost a foot of wet snow.  The wind was just right that my driveway didn't blow in. :)

End of week brought a plant meeting where we were given bonuses from last year.  Also they announced a merit pay increase of 3%, retroactive to the first of the year.   I'm going to say it again.  If there is anyone out there that is looking for work, you can find it in the Dakotas!

I've been struggling a bit with a new prescription the doc gave me.  I was SOOOO tired last week, all the time.  Thought it was from the busy weekend in addition to messing with sleep schedules, but i did a little internet search and found out one of the side affects is "extreme tiredness".  That explains a few things.

I may have to give the doc a call Monday.

Gearing up tonite for the new workweek ahead.

All for now, JULIE