An example of some of the blocks I'm piecing.  It's a scrappy quilt~ I'm using all bits and pieces from my small stash that consists of two totes jammed full. 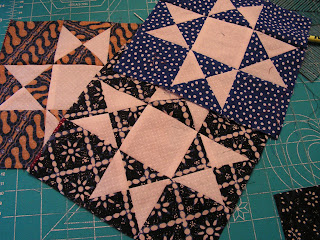 See? Most of the points are pretty darn close.  I would love it if every one was perfect.

But really, who cares? 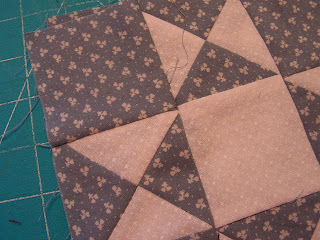 This one I missed quite obviously.

But you know what?  I'm not gonna rip it out, I'm gonna use it in the quilt!

I've always said I'm an 'immediate gratification girl'.   I like to get to the finish when I'm doing projects.

I care that it's done well, I just don't get all obsessed if there is a little "human-ness" showing!

In the past, I've been accused of being a perfectionist...

The topic came up again recently, so I did a little research.

Perfectionists, like high achievers, tend to set high goals and work hard toward them. However, a high achiever can be satisfied with doing a great job and achieving excellence (or something close), even if their very high goals aren’t completely met.

Unfortunately, a perfectionist’s goals aren’t always even reasonable. While high achievers can set their goals high, perhaps enjoying the fun of going a little further once goals are reached, perfectionists often set their initial goals out of reach.

Perfectionists are also much more afraid to fail than are high achievers. Because they place so much stock in results and become so disappointed by anything less than perfection, failure becomes a very scary prospect.

Because a less-than-perfect performance is so painful and scary to perfectionists, they tend to take constructive criticism defensively, while high achievers can see criticism as valuable information to help their future performance.

High achievers tend to have equally high esteem; not so with perfectionists. They tend to be very self-critical and unhappy, and suffer from low self-esteem. They can also be lonely or isolated, as their critical nature and rigidity can push others away as well. This can lead to lower self-esteem.

So here's the proof that I'm not a perfectionist!  I'm merely a high achiever!  :P   LOL

I shouldn't be doing what I'm doing today.

I am behind on housework.  Bills.  Outside chores. Weaving.  Pretty much everything that I should be doing.

But today, I am starting something.  I am cutting and sewing the start of a scrap quilt.

I don't need another quilt.  I don't have a deadline of a gift, or an event.

I have had a pattern picked out for awhile that will work with using up some scraps.  Because ya know, I can't throw anything away....or buy anything new without an act of congress. 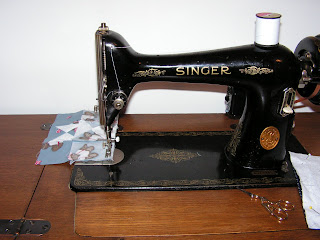 I'm getting to know my new machine.  Straight stitch only.  Don't think I can even back stitch?  I should probably get out the book and read through it just once :)

I'm going to have to figure out something for the foot control.  It's a little high for my comfort.  Need to make a heel rest or something.  Also include a way to keep it in place.  It has a tendency to get pushed under the crossbar underneath and then it goes to town by itself.  I have to fish it out from underneath so it quits sewing! 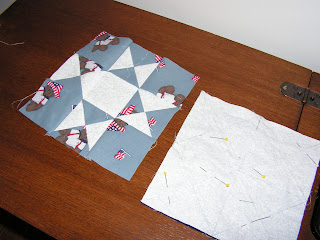 Typical me, lately.  Second block and I've already made a mistake.  See it?

It is out of character for me to make these simple mistakes.  I did it at work the other day, too.  Put a part on the wrong side of where it goes.  Stupid, dumb mistakes.

Sometimes I think I'm losing it.  I have been so unfocused lately!  I'm edgy and restless.

Are those symptoms of a midlife crisis or something???

Or maybe it's this~ 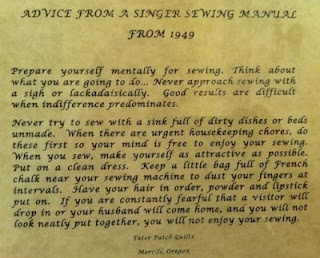 From this advice, I'm not prepared mentally for sewing (or anything else I presume).

I've got the dirty dishes and unmade bed...

Make myself attractive?  HA!  for whom?

Really, I would never do anything enjoyable if I was to "get everything put together" first...

But that doesn't mean I don't want it to be done!

Oh for a fairy godmother, or a maid, or a genie!

All for now, from a very disorganized person, 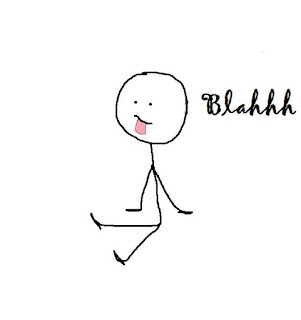 Can't seem to start and do anything.

Maybe it's the 'punch the time clock' thing.  Day in, day out same thing.  That's the problem with "jobs".
What I'm doing doesn't make my skirt fly up or anything.  I'm bored.

Maybe I'm in disbelief.  Today I happened onto the horse registration papers and realized my youngest horse is 7.  She's tame, but never even had a halter on her.  So embarrassing - especially for a supposed horse trainer like me...  Her older sis is 9.  She's halter broke, but never ridden.  You have no idea how hard it is to write that here.  I feel like a failure!

Can't seem to get into weaving.  Or crafting. Or anything.

My house is a disaster.

I don't know where to start.

I need a change.  Just not sure what it is that I could realistically change...

I guess my meaning is gettin' it done.

Small goals are how I'm rollin' these days.

If I get my dishes washed and have clean clothes to wear, I think I'm doin' ok! :)

I've got so much stuff that should be done, that I want to do... I can't seem to get started! 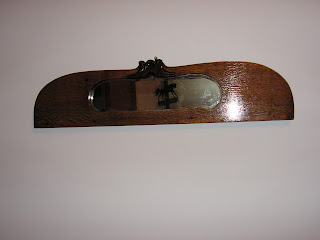 This is a small antique mirror that at one time belonged on a dresser.

I refinished it and wired it for hanging.

It should make a nice accent mirror for someone!

Now to pick the next small project.

Tonite I caught up on paying bills and I'm gonna head to bed.  I've been fighting a headache for a couple of days and it's morphed itself into a migraine.  I've taken my ridiculously expensive migraine medication and will hope it does it's magic and I will feel like a new woman by tomorrow morning work time. LOL

Not much weaving happening lately~ OY

All for now, JULIE

I've finally gotten around to my 'new' sewing machine.

Back in January I came across a machine at the junque shop and brought it home.

Finally have it up and ready to run... 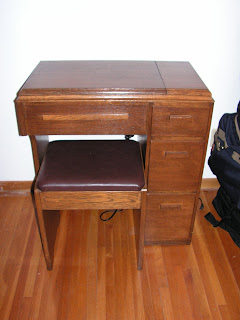 It's kind of small and unassuming when it's all closed up.  I'm thinking someone did a refinishing job on this.  It's quite nice and the stool has a nice quality vinyl on it. 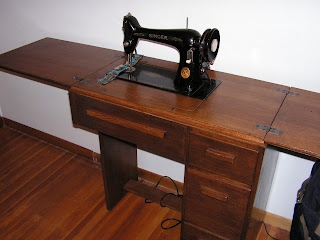 Here it is opened up.  It actually has quite a generous work space~ more than I'm used to :) 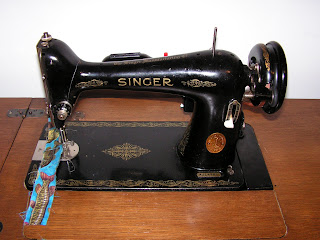 And a close up of the old girl.  I had the motor and light replaced - the electric cords were scary!  The serial number tells me this was made in 1948.  It's in nice condition.  Haven't sewn on it yet, need to find a project first, LOL. 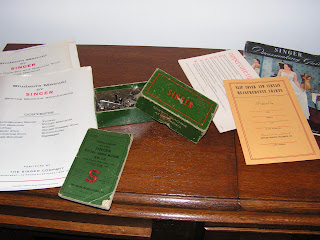 Inside the drawers I also got the original instruction book, Two student handbooks, one about the machine and the other about the attachments.  That should be handy as there is a box of attachments, also!  I didn't take the time to see which ones I have, but another day!  Plus a few bonus literature items.

I really don't know what took me so long to get this back into the cabinet.  There was a grand total of 9 screws that I had to put in...

All for now ~ JULIE 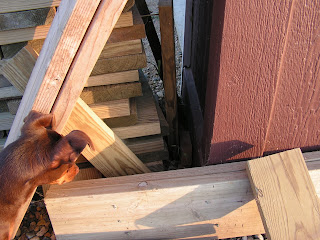 Mom, I think there is something back there! 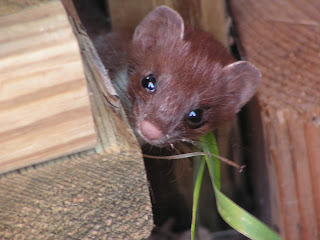 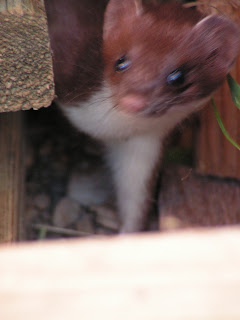 Unfortunately he slipped into the open garage,
so now I'm needing to keep an escape route open for the little bugger.

They can make a stink when they feel threatened,
so I think I'll let him decide on his own when he wants to leave!

Not that I'd want to grab him at all.
They have some lethal looking teeth.
He churped and warned me that I was a bit close :)

All for now,  JULIE

PS  Cut some strips today.  Refinishing a vintage mirror today.  Relaxing a little after some overtime last week as well as the annual 4-H horse show.   Overtime coming this week, but Wednesday off!