I've been trying to get it done...

"I"t being lots of different things.

ever heard of that West Nile stuff?

I got THAT done apparently :)

Don't worry... I've got a mild form.  Tired, headachey, sore muscles and joints, a little feverish.  Just enough to pretty much blow the last week and a half.  Spent it pretty much down except for work.

I guess I'm smack dab in the middle of a hot spot for these dang mosquitoes.  Weird thing is, the bugs haven't been bad at all this summer.  But it only takes one bite.  Lots of people here abouts are showing symptoms, some worse than others.

Tomorrow I've taken a vacation day to be a judge at our State Fair for the 4-H division.  Of course it's gonna be HOT.  Typical.  It's a volunteer thing and I told myself I wasn't going to do it.


A frantic plea by the powers that be was sent out saying they were short judges.
Lots of judges.

You know that thing called guilt?

A day of vacation given away ~ granted, for a good cause ~

And a long holiday weekend coming up. 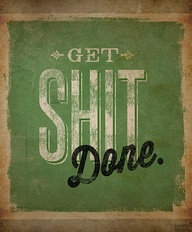 My boy left for college yesterday.

He got one last project done before he left... 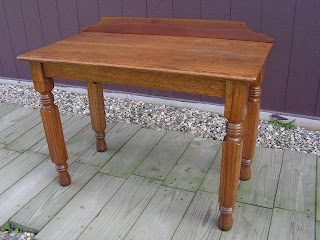 Isn't this a sweet little desk/table?

He actually would like to keep this one.  Me too :)

But I have more than enough furniture and he has at least 2 more years of moving around yet.  Someday he can start keeping some of this stuff!


So the leaving has made it hit home that we are on the final legs of summer.

I've gotten so little done that is summerish.

Where does the time go?


All for now, JULIE

Quilts in the Park

My quilt guild had an event today for our town Harvest Days.

First annual (we hope)  Quilts in the Park 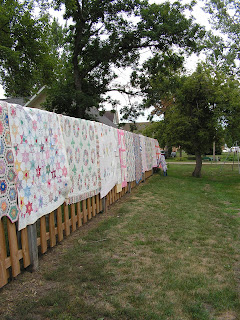 Here are the vintage quilts... 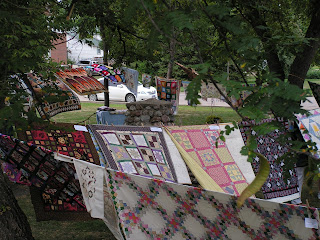 It was a bit breezy.  Lots of motion in our quilts :) 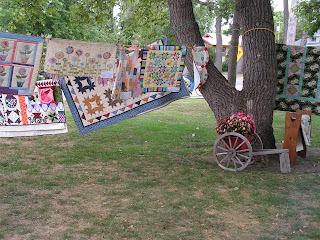 Some of the women brought garden flowers and decorations.... 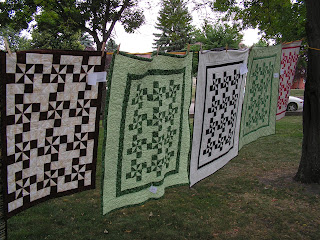 The group's mystery quilt project from a few years back... I sold mine there today ! 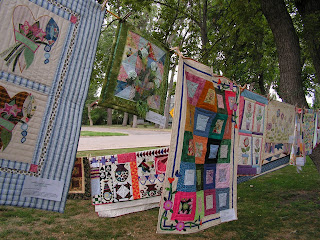 This year we did a fabric challenge.  All participants brought pastel floral fabric so everyone got a 5x5 in piece of the same.  Seventeen people joined in, so lots of variety.  Each was to be used in the project however you wanted.   Lots of variety in what was made.  I didn't get to this meeting so... 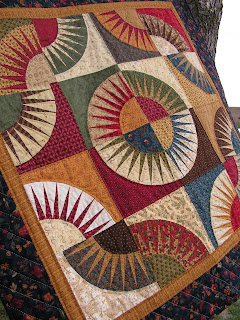 Too many beautiful quilts to show every one. 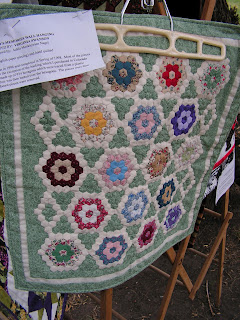 Teeny tiny hexies... I think over 970 in this itty bitty quilt. 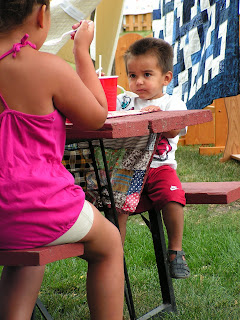 And we served rootbeer floats~ this young man was enjoying his :) 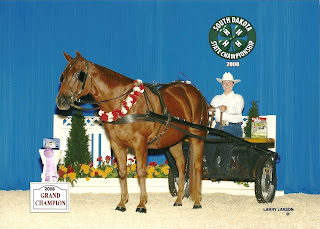 It was one of those days today.

One that started out badly and never really recovered.

By the time I got home tonite, I just didn't want to do anything. 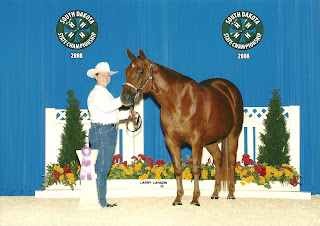 So I sat here in front of the computer.

I shuffled through some piles here and found these pictures from Leah's last year in 4-H.

Did I mention it is 4-H Achievement Days here right now?  No?  I'm involved, albeit on periphery now that I don't have my own kids in it anymore.

I got this new copier/scanner thingy awhile back and decided to figure out how the scanner works.

It was pretty easy, so decided to share these from 4 years ago.  Where has the time gone? 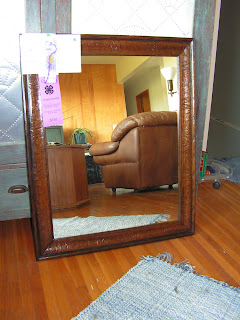 This was one of my sons last projects.  He sold it last night because he needs cash for college textbooks.

The judge that judged it 2 years ago bought it from him.  She had tried to buy it from him then :)

He's working on about 4 more projects and we'll try to sell those, too.

I ran over my neighbors dog on the way to work this morning.

It's been a tough day. 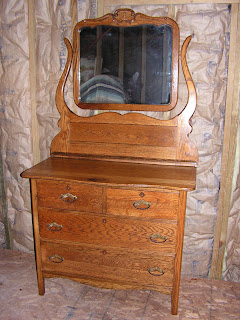 He's hoping to sell soon as he needs $'s for college textbooks.

It looks to have it's original hardware and mirror.

Nice piece~ we didn't need to strip it or restain or anything.

He did reglue some of the joints and I gave it a good oil.

The fainting couch is ready to start upholstery.

That isn't for the faint of heart.  We need to get on that!
He leaves for school next Monday~ already...