So time keeps moving on.

Some days take forever, and others I don't know where the day went while I'm trying to get things done.

It's been a challenging couple of weeks.

I'm in the midst of fall craft fair season, so I've been at an event every weekend - and will be for a bit yet.

In the midst of those, a person always has the regular day to day 'stuff'.  Seems I drive alot.... LOL

I'm a chauffeur some days, an accountant others, a 4-H youth leader others days, in addition to the job in town, and the list goes on.

The weather is steadily marching into and towards winter.  It is daunting to think of another winter like last year, but I'm afraid with the available moisture, it could get ugly again.

I also had to say goodbye to my closest buddy, Cooper. 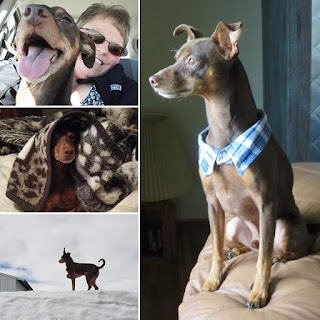 My little guy was my constant companion for better than 11 years.

It had gotten to the point where his quality of life was suffering, so the difficult decision was made to say goodbye.

I still find myself factoring him into my planning, and I seem to check for him underfoot, still.

I'm trying to stay busy and upbeat, but there are times I just want to sit down and do nothing.  I'm hoping this shall pass quickly.

Some friends have asked already if I'm going to get a new dog.

I have an event this weekend.

Of course I always think that the latest items I have woven MUST come with!

I decided not to overly stress myself tomorrow and Friday by thinking I needed to make just a few more, so I cut off the woven runners from the take up beam and tied fringe this afternoon.

Here they are after their fringe trimming.... 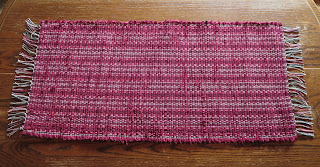 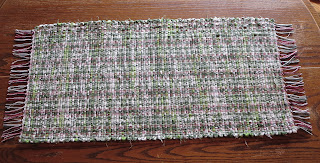 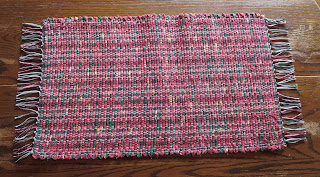 I'm digging the stripe action on the less busy fabrics.    Color doesn't show completely true, but these are Christmas-sy colors.   I kind of like the red one with the stripes.  Those stripes have little red stripes within - makes me think of candy canes.

The weather has moderated a bit here, warmer, so the snow is melting.  It seems to be always too wet this past year.  South Dakota is usually a much dryer place this time of year.  It's making for very difficult harvesting - and this spring was very difficult for planting.  It would seem that it would be a good hay year - lots of growth, but again, with all the rain, it was hard to put up hay, it was always getting rained on.  Or the ground was so wet, everyone was getting stuck.

Time will tell how expensive hay will be - and how much will be available.   My horse hay has been stacked and is settling, waiting for a stack mover to deliver it to me.  So at least I know my horses will have feed. 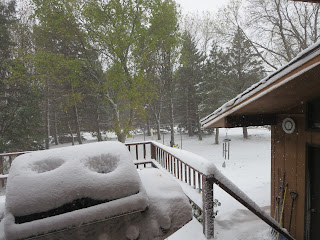 It's still coming down, too.  With wind.  So a proper blizzard!

Since it looks like December, it seems appropriate to finish up some Christmas color table runners. 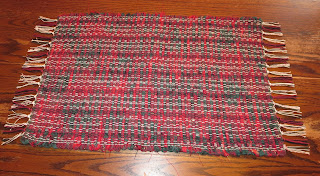 There are four more finished, but they are not much different than these.

More to come - I've dug out all of the Christmas tableclothes I could find and anything red or green.

I am so not ready for this white stuff coming down... I'm going to try to distract myself and hope we get warm weather again. At least for a little while.

The other day I forced some time at my loom.

I had just a bit of blue 'mini' rug warp left to weave off.   I wove 3 more longer denim rugs and as I was getting to the end, I found this.... 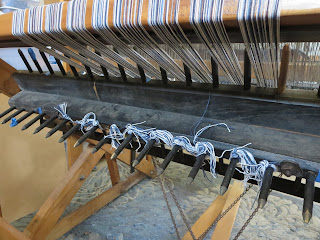 I had counted perfectly while sectional warping!

NEVER happens :)  But this time it did!

So I took a commemorative photo, just to prove it can be done... LOL


I promptly made a plan change - I had planned on warping with black/charcoal, gray and white.  But...

I have missed the whole period of time I had planned for that warp and am looking at Christmas season without much in the way of "Christmas" colored inventory.

So instead, I warped this. 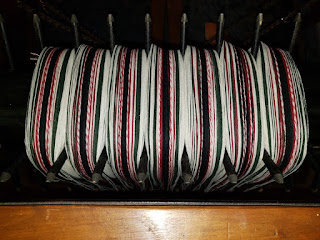 This warp is made up of forest green, brick red, black, white and a variegated red/white that has been languishing in my stash.

This is working nicely with the Christmas tableclothes I had previously processed and stashed for use.

These are tablerunner widths.  I'm sure I won't have enough of those pre processed wefts to finish off the 75 revolutions I put on, so I may be doing some crazy experiments to see what I can make work with this go round.

On the home front, my brother has returned and has temporarily agreed to do the daily bucket chores for the cattle in the yards.

Good thing - I was at the end of my endurance.  I still need some recuperation time, but that will take a bit as I still have basically 3 jobs plus my 'extra curricular' activities.  :)

I have a show next weekend (10 days) that I need to prepare for.  And it is the holiday show season here.  Three confirmed shows after this one, and I found another I may apply to.  Doesn't sound like a whole lot when I say it, but the gut tells me it is!  LOL

PS.  There is a snow storm predicted in a couple days.   I am SO NOT ready!

So I've survived ( lol ) the first time attendance to the Fort Ransom event.  I believe it was the 52nd annual?  This show is rain or shine - in North Dakota on the last week of September.  Always a good chance the shine will be in short supply!

Saturday morning I was up at o dark thirty to get to the location by 7.  Almost 2 hours drive time....

It was a brisk 35 degrees - I could see my breath - and I had an outdoor 10 x 10.  I got my canopy up, unloaded all the product and promptly dug out the dry socks and shoes and switched.  Thank goodness I had thought of that as my feet were squishy, it would have been a long and miserable day that way!

Saturday was a nice autumn day, sun for a bit - high of about 52.  It got overcast in the afternoon and there was a chill in the air, but there were many buyers.  At closing time I was able to hitch a ride home with a neighbor who was also there with a booth.  Left my truck and saved myself some driving time and gas.

Sunday morning brought rain.   It rained in various degrees of liquid all day, but the temp had risen from the day before, thank goodness.  It seemed very slow as far as attendees, but I still had a great day.

Over all, I will most surely apply again for next year.  I had my largest sales event ever!   I sold 21 rugs, 6 runners and 5 (only!!  surprised me) flyswatters.

By the time I had everything packed up, I was wet, tired and ready to head home.   I drove into the garage, took my purse inside and decided to leave everything loaded until the morning.

I never did get any pictures, as it would have meant standing in the rain.  But it was a great weekend!

Right now I am really dragging.  I'm feeling the effects of 3+ weeks of doing cattle chores, fixing fence, moving my parents into an apartment, the normal bookwork/accounting for the parents ranch, my own weaving processes and starting a new job in town.   I've barely made it every other day to check on my horses and checking in with the cows that are now calving.

I could use some help :)