Bit by bit I am making progress.

I just have to keep reminding myself of that when I get discouraged!

Here's how far I've gotten with the new loom... 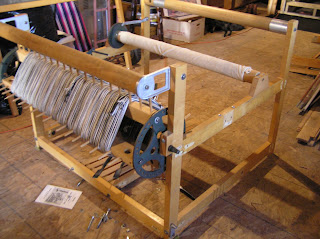 Man o man was this loom taken apart!  Way more dismantled than it would have needed to be.

But then some things that probably should have been removed weren't...

Obviously the previous owners were inexperienced :) 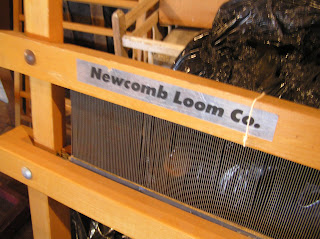 This is a big girl.  Bigger footprint than my union.  Wider weaving width, too.  I've got the basics under control, but may need to do some more research when it's time to put on the harnesses and the ratchet to tighten up / advance the weaving.  It's not obvious yet to me how it all goes together.  Maybe as I get farther into it, it will be more clear.  I do have a book with it, but the pictures aren't the same as the loom.  Typical.

Reason this is as far as I've gotten?

I'm still trying to finish up outside projects before snow flies.

Got started on this tonite. 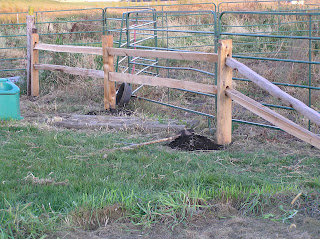 I'm putting up some split rail...  it's pretty easy, the posts aren't that long so not very deep holes to dig.  Problem is I'm doing it all manual.  A shovel and a twisty post hole digger with only one handle.  It's what I've got! 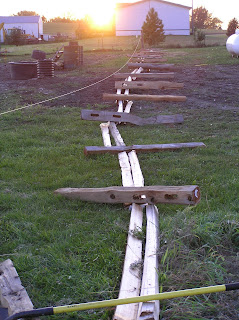 Here's the line up of parts for this section of the fence.  Too bad I've got two more sections after this to do.  I'm gonna have to pick up the pace - will need to dig more than 3 holes a night to get done in time!

Unfortunately work is taking up alot of my time.  We are now in Mandatory Overtime.  I've averaged about 55 hours a week since I started back in March.  Makes me tired just thinking about it.

I am in the process of becoming a permanent employee.  Problem is I have to go to night shift to do it.  :(

Not looking forward to that - I'm a morning person.


All for now~ JULIE

A couple weeks ago I mentioned that I had found a loom that I was pretty sure I was gonna get myself.

Well, this weekend I went and got it.

Last Monday at work, I figuratively "hit a wall".  I was toast.

Then and there, I knew I needed to take some days off.  I had already planned on not working Saturday, but at that moment I went and requested Friday off, also.  I made it thru the rest of the week, barely, as I also learned that my old dog ( the one I lost in the divorce) had to be put down ... but that's  a different story for another time.  Much to deal with with that situation.

That meant 3 day weekend.  Haven't had two days off in a row in awhile, much less three :)

Unfortunately, that doesn't mean I can make myself rest ~ by now I'm sure you can tell I don't "do nothing" very well.

On Friday I messed around at home doing laundry and a bit of cleaning.  I resisted the urge to start messing with new fence, LOL.


In the afternoon I took off on my planned route.  Being me, I didn't have just one thing to be accomplished, I had several.  As it turns out, I made 6 different stops along the way, putting on over 400 miles.

First stop (Watertown)  was dropping off a sewing machine for my friend at the repair shop... then having time to kill before my appointment with the loom lady -

Stop two (Clear Lake) was at a high school friend to see her, her family and her mom.  Her mom is actually my ex's aunt, but she feels like mine, too.  She has been ill and since I was in the area, I made sure to stop.  It was nice seeing my high school friend, too.  She is one of the very few I am still in contact with - probably always will be :)

Then off to get my loom! (Dell Rapids)  It was 8 PM when I got to the rural farmhouse-  Loaded up pieces and parts to Newcomb Loom!  Four Harness, Six treadle, sectional beam.  I'll be posting a pic or two when I get it put back together.

There was also a box of accessories that went with, that I didn't really look at at the time... This is what I found. 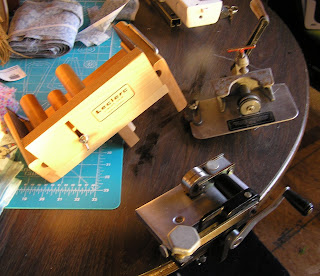 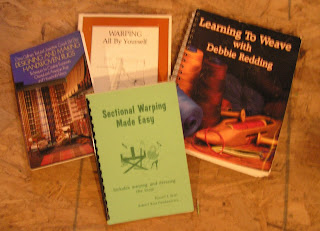 Also, some weaving and warping books.

A spool tree and warping hooks and some shuttles were also there.  A nice set up!

Being that it was now after my bedtime and I was fading fast, I took off for Dakota State College (Madison) .  I was going to spend the night at my daughters apartment.  Also saw the son, who was staying over, too.

Left first thing in the morning for the next stop at South Dakota State College (Brookings) to see child number 3.  She had a team event that I took in and then saw her very nice apartment she is sharing with 3 other girls.  Had dinner with her and her sis who had come up to visit, and then took off for points north.

At that point I was back at my first stop (Watertown)  .  I picked up the finished sewing machine, plus another one, and then made my way to the North Country Fiber Fair.   I watched a sheep dog demo, looked briefly at the vendor booths, and bought a fun tool that I am going to be using with my salvaged yarn.  More on that another day...

Then the last chore - Walmart for supplies.  That is always fun- not... but needed.

I drove into home (Britton) at about 8:30 just before full dark, unloaded my treasures from the truck, and went to bed.

Today I've puttered about in my basement, making room for my new loom.  I've got all the pieces down there, but quickly decided the brain power isn't up to snuff to tackle that today.

That's why you're going to have to wait on pictures of the loom!

All for now from a tired, but excited,

Writing myself a note...

I've got a haircut tomorrow.

Thought I'd better write a note for myself seeing as how I never know what day it is.

It's not unusual for me to go thru a day, thinking constantly that I have this "thing" that I have to do right after work.  But then I get distracted and totally space that "thing" off!

Must mean I'm tired or have too many things on my mind right?  Not that I'm totally dumb... HAHA


But then there is the "forget to read my notes" problem I have! 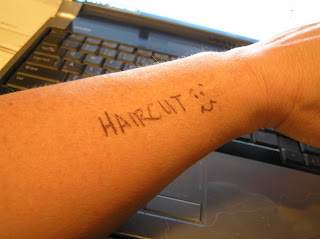 Can't lose this note, and it's under my nose all day long.

Whatever it takes, right?

Hard tellin' where the next bit of weaving material will come from in my world...

A couple of months ago at work, I was asked by one of my coworkers if I could sew new covers for pillows.  They had gotten a new camper and wanted new matching pillows for the new place.

They also asked if I'd weave them a rug from the same material...

Well,  I ended up suggesting a black denim rug - I had one in the size they needed and thought it would work for them, and sewed them up the pillows.

Of course, I took the finished products into work for them :)

Now, yesterday, another coworker came to me and asked me if I was interested in some 'pillow trim'.

She said they had been cleaning out her mothers place and thought since I was "crafty" I might be able to put this to use.   Tell you the truth, I wasn't sure exactly what she meant by pillow trim.  So I said I'd take a look.

Check out what I brought home ~ and she wouldn't take a penny for it... 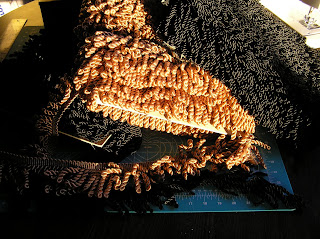 There is this chunky trim... 2 black and 1 tan.  Whole bolts of the stuff! 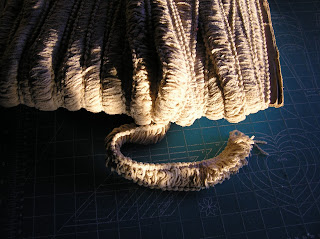 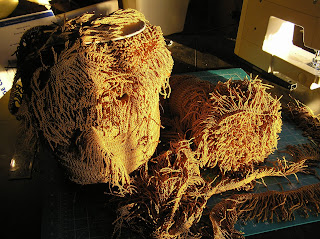 And this... There are miles of this stuff!  Probably not quite, but there is oodles of this.  A full spool and a partial.

I've already got ideas cookin' in the ole brain for the stuff on the spools.

Now I need to find the time and energy to try it out :)

Like I said.  Hard tellin' where I'll find the next inspiration!

All for now, it's my bedtime :)
Julie

That chore is done 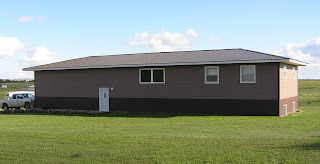 Today I forced myself to finish painting the trim on my house.  The man boy did get the body of the thing painted before he went back off to college, but it was up to me to finish. 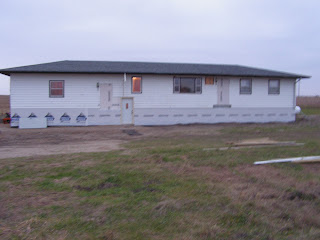 Remember this?  Guess it looks a little better now :)


It feels like I've got nothing done this summer, but when I am honest with myself...

The painting is done, and there is a lawn!

Any ideas for me?  I think my front door could be a different color than white, but what color?

Or maybe some kind of decoration/treatment/ ??? to make the door not look so .... little?

And I need to plant something ~ man is it bare looking!

I do still have to get my split rail fence put up.  It's lying in a pile in the side yard.  If only I was going to be home tomorrow, I might actually feel the urge to start.

Instead I'm going to the State Fair.  Mostly to pick up the county 4-H exhibits, but while I'm there I'll take a quick look around.  Miss the days when I could spend the entire week there...

Still working mega hours...  I sure needed this holiday.  I got two days away!  I'll only have a five day week this week, instead of 6!   Too bad I didn't do much resting :)

Somebody take a moment and have some fun for me this holiday weekend, k?