Last night was a beautiful evening.

We just came off a icky hot muggy stretch.  Like high nineties into the hundreds.  With humidity.

Then the last few days we've had smoke from Canada added onto that.

But yesterday it was pleasant.  Low 80's.

The horses were relieved... 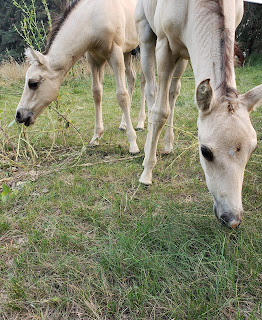 The babies are growing.  Boy in the back, girl in the front.

I had originally thought the boy would have a name Dragonfly, but I believe he has become Rumblebee....  his barn name will be Hemi.   Google Rumblebee and you can figure out where that name comes from, I had to.  It was suggested by my son-in-law.  It had to grow on me, but I think it's gonna fit him.

The little girl will become Cricket in some sort of fashion.

Color is still to be determined.  Sire is a buckskin, mothers are red dun and bay dun.  They seem to be darker underneath this light colored baby hair.  Baby shed should start in a month or so and we can see what that brings.

I haven't been weaving a whole lot.  Work in town, lawn care, even rode some to bring in some cows last weekend!  Projects in the house and a general malaise that happens when it is so hot.  I've got a garden that is brand new - didn't expect much from it this first year, but we are getting Zucchini and have had a few cucumbers.  The tomatoes are coming as well as some peppers.  The root crops are pretty much failures, but the rhubarb and asparagus that we transplanted seems to be doing well.

New composted cow manure in raised beds, mixed with drought conditions and the heat made it a challenge.